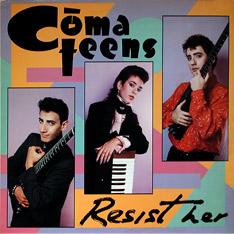 German release of two songs from the album Deal With It.

Songs:
Resist Her
Deal With It