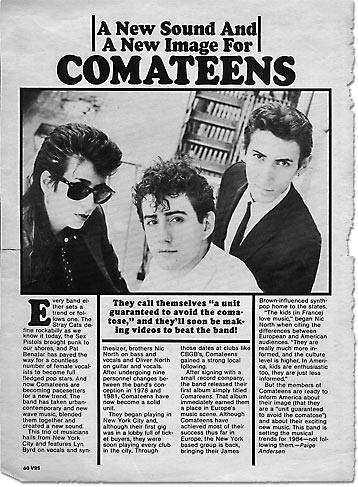 New Sound And A New Image For Comateens

“…Every band either sets a trend or follows one. The Stray Cats define rockabilly as we know it today, the Sex pistols brought punk to our shores, and Pat Benatar has paved the way for a countless number of female vocalists to become full fledged pop stars. And now the Comateens are becoming pacesetters for a new trend. The Band has taken urban-contemporary and new wave music, blended them together and created a new sound…setting the trends for 1984 — not following them.”
—Paige Andersen 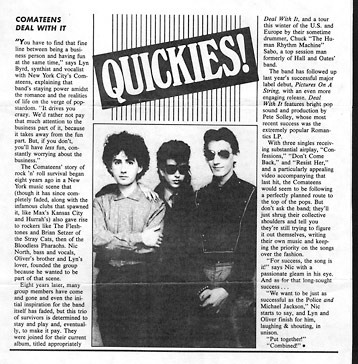 Quickies! Comateens Deal With It

“…The band has followed up last year’s successful major label debut, Pictures on a String, with an even more engaging release. Deal With It features bright pop sound and production by Pete Solley…With three singles receiving substantial airplay, Confessions, Don’t Come Back, and Resist Her, and a particularly appealing video accompanying that last hit, Comateens would seem to be following a perfectly planned route to the top of the pops…”