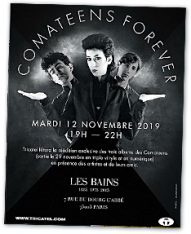 A reissue release party, dubbed Comateens Forever was staged by Tricatel at the ledgendary Les Bains in Paris, for an intimate gathering of music industry cohorts, friends and fans.

It was great to see so many familiar faces from long ago, many who helped Comateens along the way, such as Etienne Daho, Jean-Eric Perrin and Laurent Chalumeau. Nicholas and Lyn caught up with old pals, made some new ones, and were happy to mingle, take photos and sign records for their die-hard fans.

Comateens were excited to join French pop star Etienne Daho on stage during his Eden concert on November 11, 2019, for a final encore at the Paris Philharmonie, to perform Daho’s new dance club-remix of Comateens big 1983 hit, Get Off My Case.

The supprise appearance of Comateens, their first performance in Paris in 29 years, was enthusiastically received by the 2,000 Daho fans in attendance in the hall’s Grand Salon.

The new release of Daho’s club-remix of Get Off My Case, is currently bundled with Daho’s re-issue of his visionary 1996 album Eden, included as one of a number of rarities and unpublished works.

The current remix started its journey at the time of Eden’s original production. Comateens were in London at Eden’s 1995 Olympia Studios recording sessions. Lyn sang backup on a track and Nicolas wrote two hit songs that were on the album; Soudain and Me Manquer. Daho and Comateens earned a gold record for those efforts on Eden, but a few of their collaboration side projects never found their way into general release.

The new Get Off My Case is the first of those songs to be polished and released. In addition to digital downloads, it will be included on an upcoming vinyl EP entitled Comateens vs. Daho. along with Sally Go Round The Roses and Sleep, to be released this summer.

Comateens performing with Etienne Daho on his re-mix of Get Off My Case, the final encore of his Eden concert at the Paris Philharmonie on November 11, 2019. This full video can not be posted on social media currently due to current copyright issues.

This video includes footage shot from backstage by Altemus combined with videos shot by various members of the audience which were posted on instagram and solicited by Comateens to be included in this video project. If future video emerges it can be re-edited to be included.

Thanks to all those fans that contributed to this video; 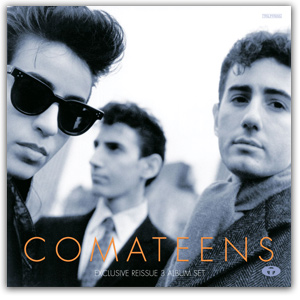 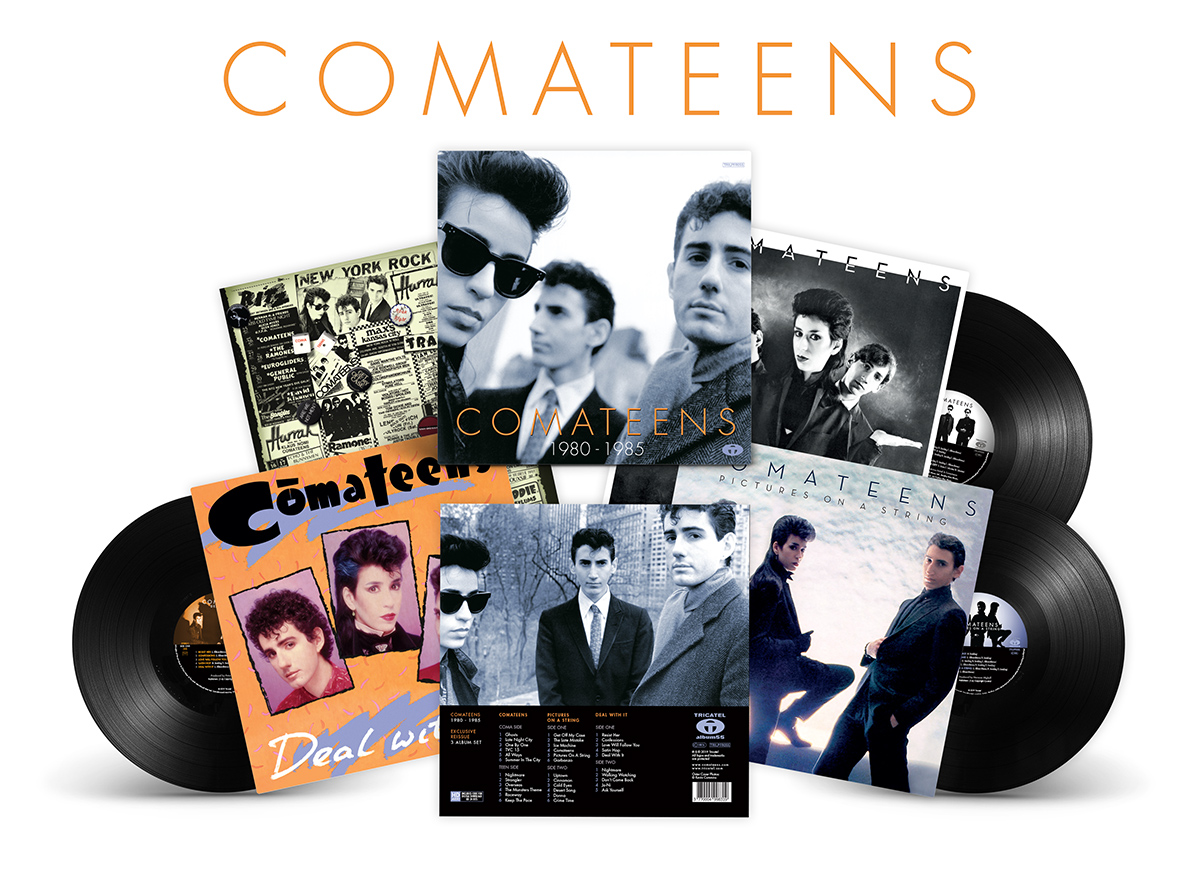 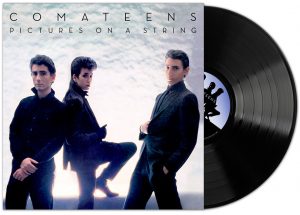 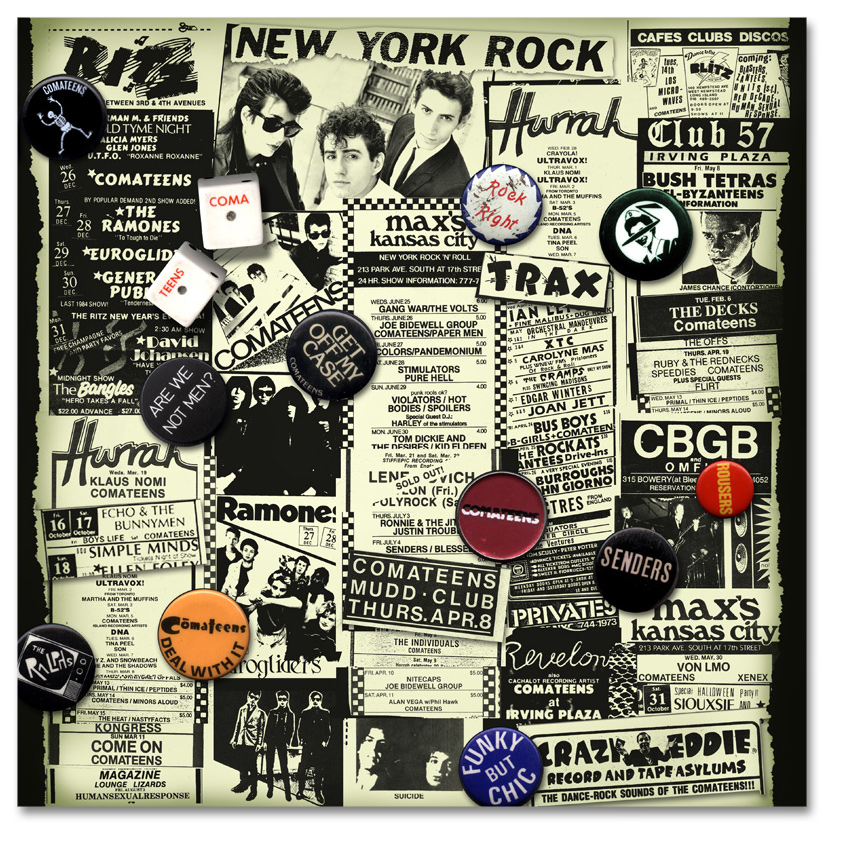 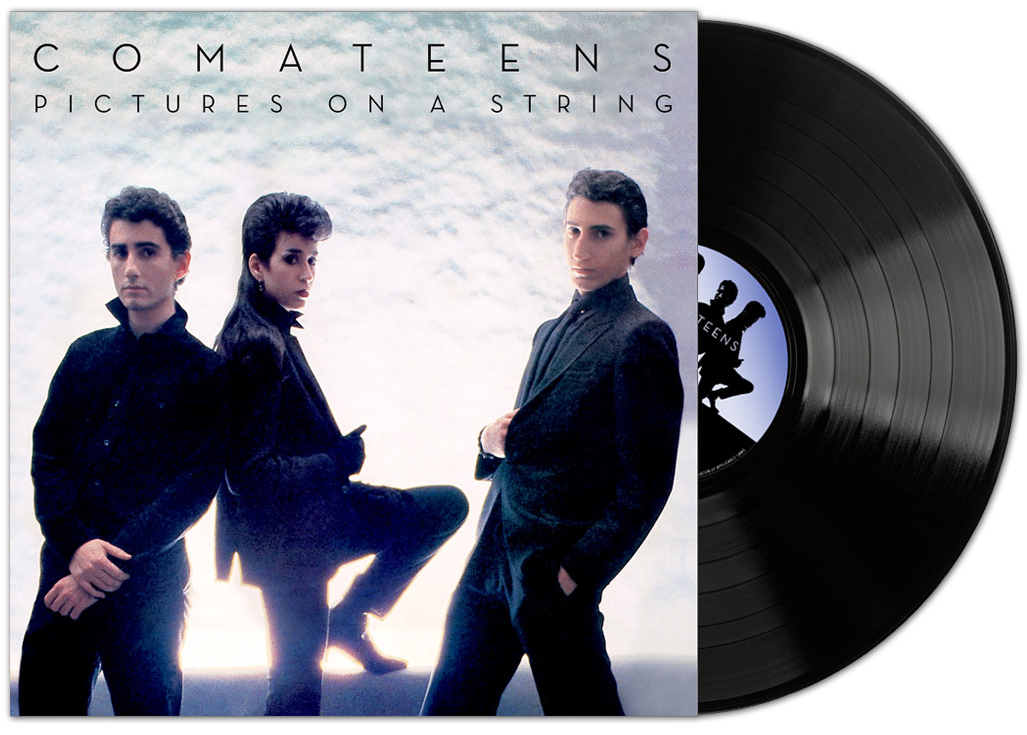 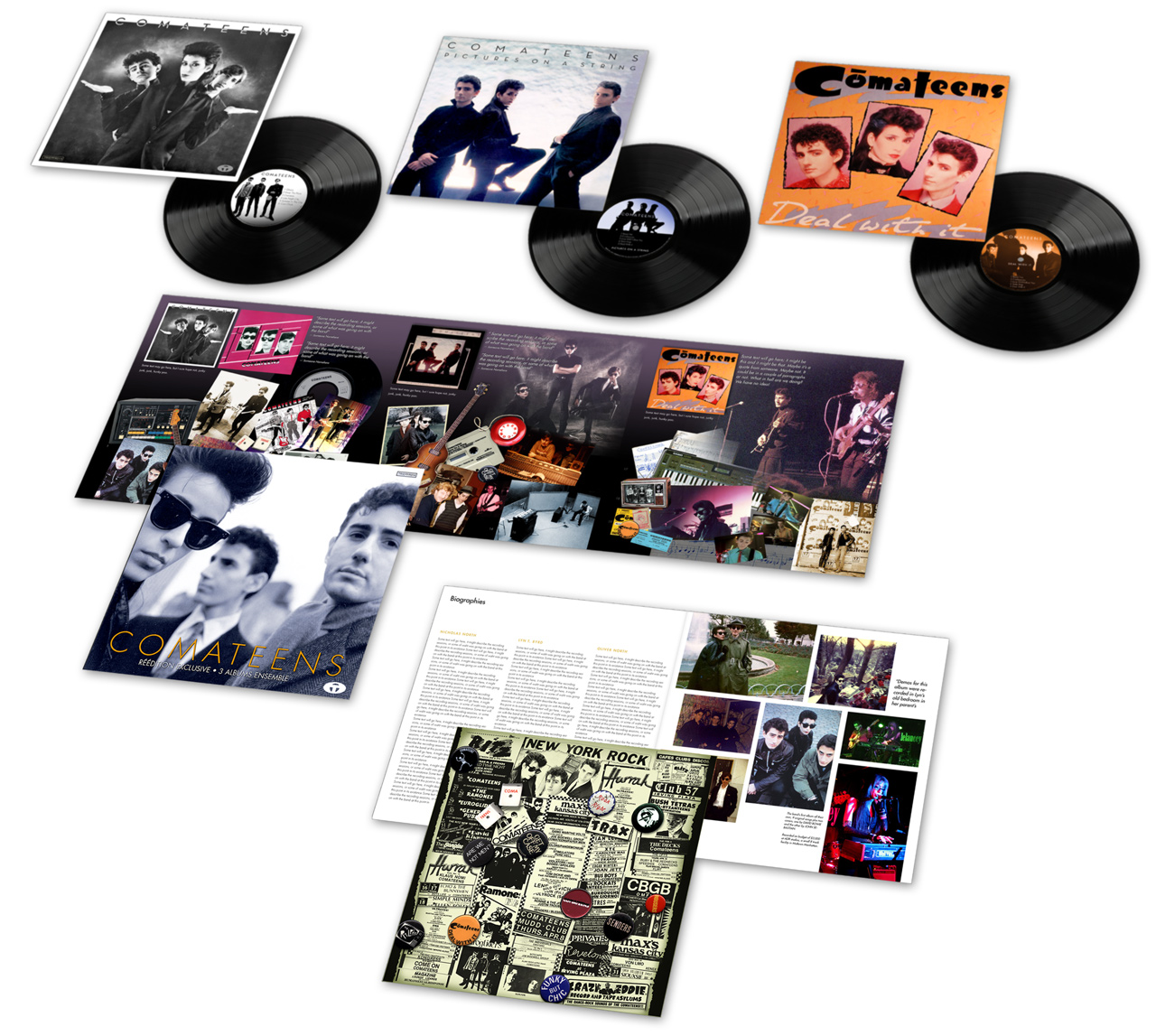 Welcome to the Comateens’ new Website. Our old site was a wiz-bang flash site, with an interactive elements, animations and sound effects, it might have been a little anoying, but it was fun and informative. The original site was first put live in 2004, but that was at the end of the Jurassic-web period.

They say no one visits Websites anymore, but we needed a place to put all this stuff anyway, and Flash built Websites are a non-existent on tablets and phones so here is our new responsive site that you can enjoy on that tiny little screen in your hands or one of those massive “computers” that hogs your desktop.

We want to thank Krel Studios for the original site and this new Website and their efforts to push the Comateens into the twenty-first century.

We will keep a link to the old fan-favorite Flash Timeline, so visitors can be properly amused and annoyed. 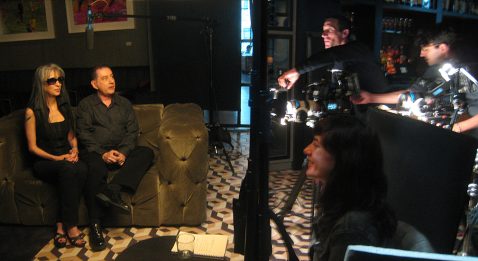 On June 9, 2015 Nicholas West and Lyn Byrd went to meet director Antoine Carlier and his crew at a New York City boutique hotel located in Soho to be interviewed for the documentary feature; Etienne Daho, Un Itinéraire Pop Moderne.

The Comateens and Etienne started their recording careers in the same period, shared managers and labels over the years, and have been associates, friends and collaborators ever since. Nicholas and Lyn were happy to share their insights and memories for the production. 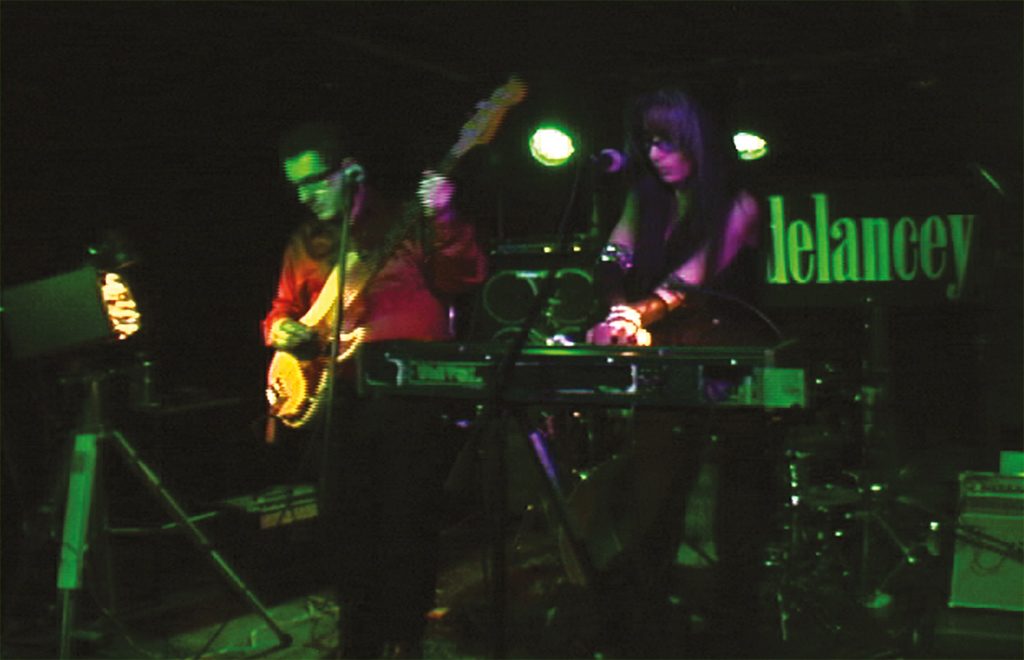 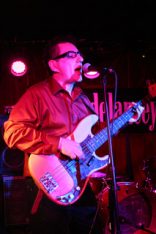 These acts reconvened for one not-to-be-missed night along with many more of their artistic alumni, and an appreciative audience packed with many diehard fans and adventurous newbies. With so many familiar faces, it was a party to remember.

When Comateens were contacted about performing, by Tesssie Chua who organized the event, they had not played together for almost twenty years, and had no guitarist since the passing of Oliver North.  A plan was made to perform some of their early hits using a monophonic keyboard, and as they had started out, playing with their beloved “Rolly” a Roland CR-78 Compu-Rhythm drum machine. They still needed a rhythm guitarist and Mitro Valsamis a fellow Bronx Science attendee and a close friend of Oliver’s graciously volunteered.

Mitro, like Oliver, had been a guitarist since high school, performing with a number of bands, including a punk band out of New York City in the ’90s called Trick Babys. and in the 2000s with punk-soul band Mighty Fine. He knew all about Oliver’s demanding and brilliant guitar work, felt he could do the style justice and spent the next few months practicing. In addition to being an excellent guitarist Mitro was an olympic-level fencer, a two-time national fencing champion in the Cadet Sabre division, and then coach at the Brooklyn Bridge Fencing Club. Oliver’s aggressive playing style is particularly demanding for any guitarist, and the strains of practicing while also fencing, lead to Mitro having to wear an elbow brace to mitigate the physical strain. It was all worth it, and on reunion night he gave an excellent performance on Comateens classics.

Late in September a final rehearsal was held at Nic’s upper-west-side apartment, with a small audience of close friends.

Below is an excerpt from an article in the New York Post in 2010, that gives more information about the late 20th downtown century scene that revolved around this NYC TriBeCa club, an important venue for underground music and counterculture events. 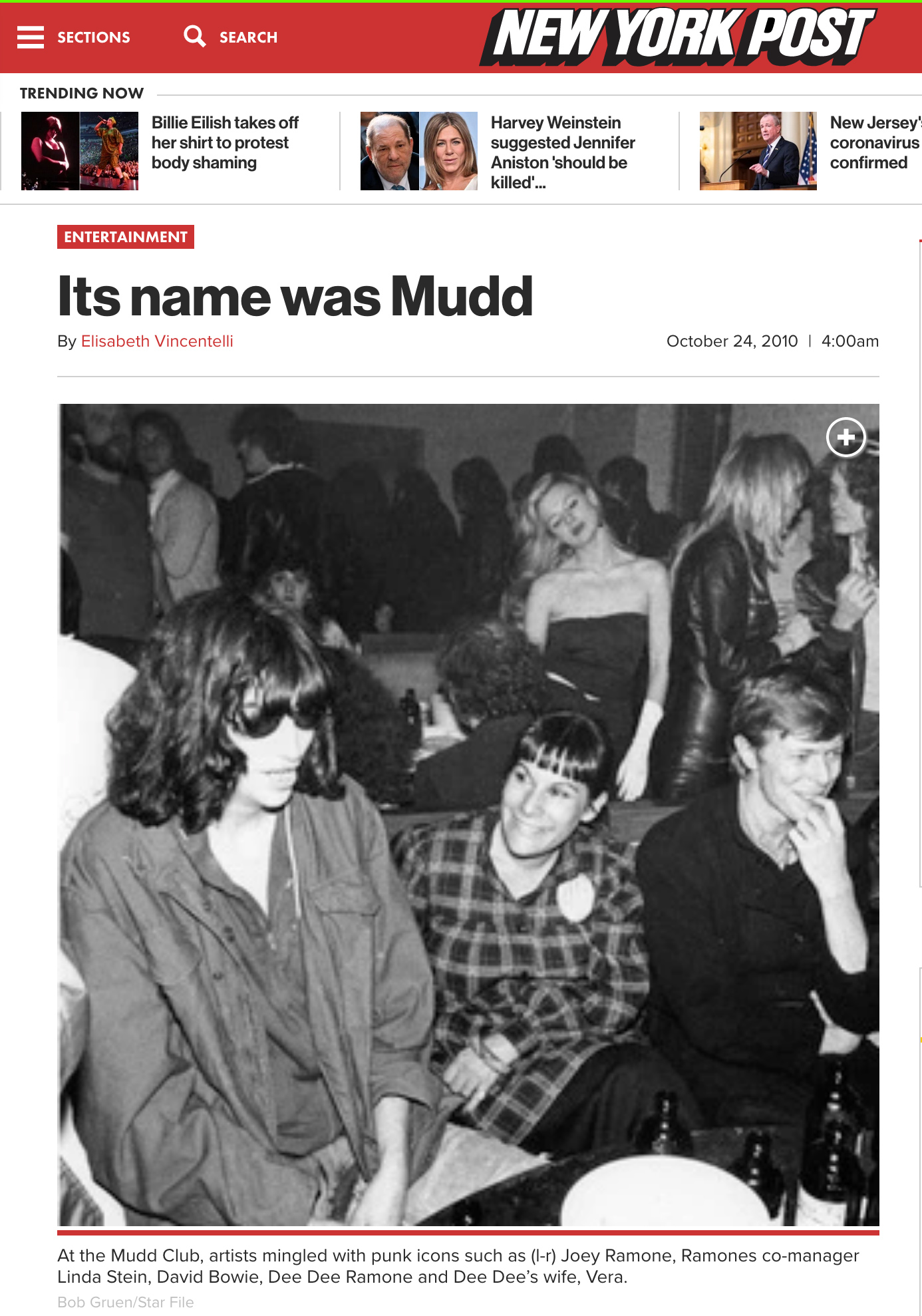 Its name was Mudd

Save for name checks in songs by the Ramones, Talking Heads and Nina Hagen, the Mudd Club may well be the best New York venue you’ve never heard about. While CBGB and Max’s Kansas City have been lionized, Mudd Club and its contemporary, Club 57, played a key role in late-’70s/early-’80s New York.

Several alumni will attend a reunion party at the Delancey Lounge on Thursday, organized by Tessie Chua — who, back then, often performed dressed as a giant cockroach.

“It was more arty, more fashion, more glamour than CBGB’s or Max’s,” says Lyn Byrd of the Comateens, which is re-forming for the event. “It was the heroin-chic place — it was packed with that drug.”

The multi-floored Mudd Club, at 77 White Street in TriBeCa, was self-consciously edgy. It had a door policy, of sorts. Employee Anne Lilja (then Gustafsson) created exclusive laminated cards that were sent to people who founder Steve Mass wanted inside. “I guess we were pretty arrogant, but then again, we were the scene,” she says.

This was countered by a sense of wild freedom. The venue cultivated an anything-goes attitude and presented acts ranging from Fab 5 Freddy to William Burroughs, along with a nonstop flow of parties.

Club 57, in a tiny Polish church’s basement on St. Marks Place, was the more rambunctious, campier sibling. It became famous for its Monster Movie Club and goofy theme parties like “Putt-Putt Reggae Night” and “The Model World of Glue.”

“There wasn’t much difference in our minds between musicians, artists, performers,” says Scharf. “I’m known as a visual artist, but I used to perform back then, singing and dancing and all that crazy stuff.”

The scene was devastated by overdoses, hepatitis C and AIDS, but its survivors have no regrets. “Every day was different,” recalls photographer Marcia Resnick. “But you could trust it to be cool. Always cool.”

And if CBGB hogs all the glory now, that may be because the Mudd Club scene never wanted it.

“There was an anti-branding mentality behind them,” says Club 57 manager Ann Magnuson, an artist and musician who went on to become a Hollywood character actress. “It was a spirit of counterculture, with an emphasis on counter.”

Read the full article at the New York Post