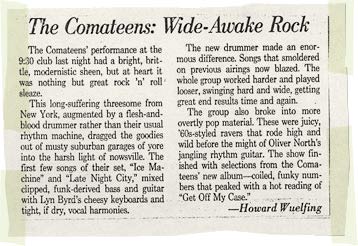 “The Comateens’ performance at the 9:30 club last night had a bright, brittle, modernistic sheen, but at heart it was nothing but great rock ‘n’ roll sleaze. This long-suffering threesome from New York, augmented by a flesh-and-blood drummer rather than their usual rhythm machine, dragged the goodies out of musty suburban garages of yore into the harsh light of nowsville…Songs that smoldered on previous airings now blazed. The whole group worked harder and played looser, swinging hard and wide, getting great results time and again. The group also broke into more overtly pop material. These were juicy, ’60s-styled ravers that rode high and wild before the might of Oliver North’s jangling rhythm guitar…coiled funky numbers that peaked with a hot reading of Get Off My Case.”
—Howard Wuelfing 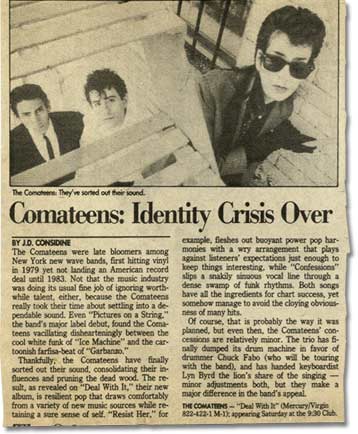 “Resist Her, for example, fleshes out buoyant power pop harmonies with a wry arrangement that plays against listners’ expectations just enough to keep things interesting, while Confessions slips a snakily sinuous vocal line through a dense swamp of funk rhythms. Both songs have all the ingrediants for chart success, yet somehow manage to avoid the cloying obviousness of many hits.”
—J. D. Considine