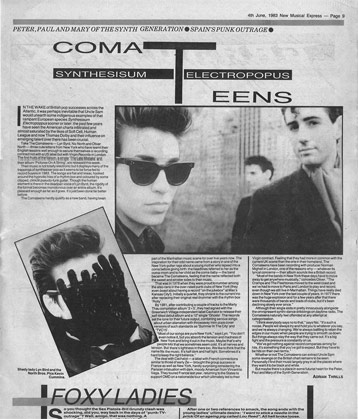 “…The inspiration for their odd name came from a story in one of the New York gutter rags about a young mother who lapsed into a coma before giving birth: the headlines referred to her as the coma-mom and to her child as the coma-baby—the band became the Comateens, feeling that the name reflected both the sinister and sweet sides to their music…By 1981, after contributing a couple of tracks to the Marty Thau compilation album 2×5, they had signed with the Greenwich Village independent label Cachalot to release their self-titled debut album and a 12″ single Ghosts. The records set the tone for their future output, combining serious songs about urban alienation with throwaway mini-pops cover versions of such standards as Summer in the City and TVC15.”
—Adrian Pill