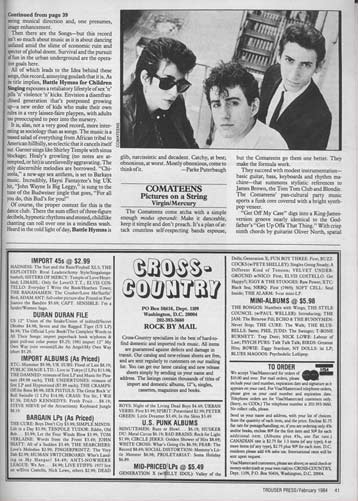 “The Comateens come atcha with a simple enough modus operandi; Make it danceable. keep it simple and don’t preach. It’s a plan of attack countless self-respecting bands espouse, but the Comateens go them one better. They make the formula work. They succeed with modest instrumentation—bass guitar, bass, keyboards and rhythm machine—that summons stylistic references to James Brown, the Tom Tom Club and Blondie. The Comateens’ pan-cultural party music sports a funk core covered with a bright synth-pop veneer. Get Off My case digs into a King-James-version groove nearly identical to the Godfather’s Get Up Offa That Thing. With crisp ninth chords by guitarist Oliver North…” 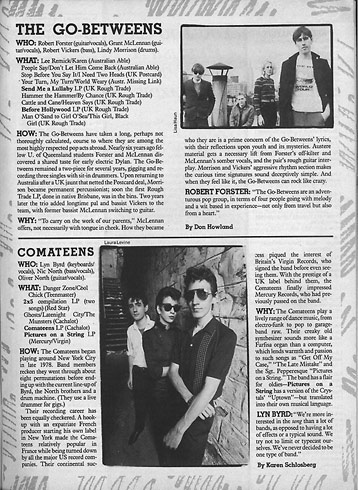 “…The Comateens play a lively range of dance music, from electro-funk to pop to garage band raw. Their creaky old synthesizer sounds more like a Farfisa organ than a computer, which lends warmth and passion to such songs as Get Off My Case, The Late Mistake and the Sgt. Pepperesque Pictures on a String. The band has a flair for oldies — Pictures on a String has a version of the Crystals’ Uptown—but translated into their own musical language… ”
—Karen Schlosberg