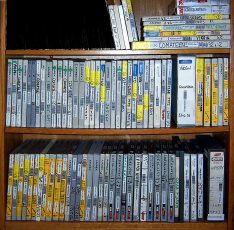 January 28, 2008; After slow-moving negotiations with a tangle of media companies, Comateens finally receive the physical master tapes for their albums and remixes. A total of 115 tapes and 8 videos were tracked down, safely stored in the tape vaults of Abbey Road Studios in London. 400 pounds of material were shipped via FedEx to NYC.

Nicholas West and Lyn Byrd meet director Antoine Carlier and his crew at a New York City boutique hotel located in Soho to be interviewed for the documentary feature; ‘Etienne Daho – Un Itinéraire Pop Moderne’. Comateens and Daho started their recording careers in the same period, shared managers and labels over the years, and have been associates friends and collaborators ever since. Nicholas and Lyn are pleased to share their insights and memories for the production. 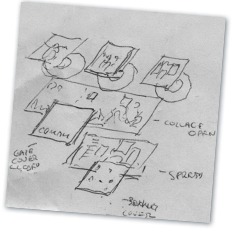 Begin working with independent Paris-based label Tricatel, towards producing a deluxe reissue of Comateens first three albums. Nicholas West will oversee selecting, digitizing and remastering all the material, and Lyn Byrd will restore graphics, and design and produce the physical package. 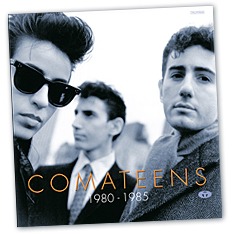 Reissue release of the bands three albums in a deluxe triple gatefold vinyl set, the first exhibit in Tricatel’s new “Imaginary Museum.” The package includes; cover photos from renowned rock photographer Kevin Cummins, three high-quality vinyl discs with new labels and inner sleeves that are repros of the original album art, a Comateens timeline collage and an 8-page booklet with archival photos and commentary by Laurent Chalumeau and Jean-Éric Perrin. 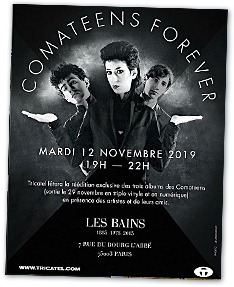 A reissue release party, dubbed Comateens Forever was staged by Tricatel at the ledgendary Les Bains in Paris, for an intimate gathering of music industry cohorts, friends and fans.

It was great to meet the Tricatel crew in person and to see so many familiar faces from long ago, many who helped Comateens along the way, such as Etienne Daho, Jean-Eric Perrin and Laurent Chalumeau. Nicholas and Lyn caught up with old pals, made some new ones, and were happy to mingle, take photos and sign records for their die-hard fans.

Comateens join French pop star Etienne Daho on stage during his Eden concert on November 11, 2019, for a final encore at the Paris Philharmonie, to perform Daho’s new dance club-remix of Comateens big 1983 hit, Get Off My Case. The surprise appearance of Comateens, their first performance in Paris in 29 years, is enthusiastically received by the 2,000 Daho fans in attendance in the hall’s Grand Salon. 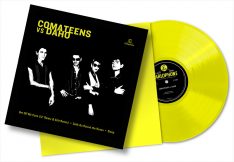 Release of a 12″ EP, largely recorded at Olympic Studios in London, during the sessions for Etienne Daho’s 1996 release of Eden. Etienne, Lyn and Nicholas recorded a cover of the classic, Sally Go Round The Roses, and Nicholas played bass, and along with Lyn sang backing vocals on another of West’s compositions, Sleep. In addition Etienne directed a club-remix of Comateens hit Get Off My Case to be produced by FABIAN WALTMAN.