“…The group’s consistent rhythmic sound mixed with the electronic sound of the synthesizer makes Comateens a hard act to follow. …’Get Off My Case’ and ‘Ice Machine’ are the two outstanding songs on Pictures on a String. Both have a strong vibrant funk influence… Originally sung by the Crystals in the early ’60’s, ‘Uptown’ is out of this world when sung by Byrd. Her hypnotic vocals and the semi-psychedelic musical backup make the Comateens version a treasure in it’s own right. …The band’s music crosses all boundaries of music. So if you like funk, new wave or even rock ‘n’ roll, Comateens new album Pictures on a String will jar you out of your seat and onto the dance floor.”
—John Reid 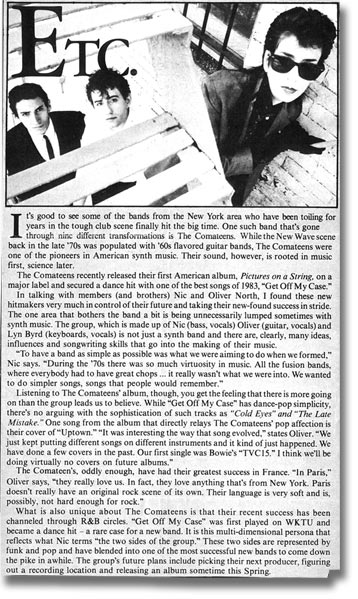 “It’s good to see some of the bands from the New York area who have been toiling for years in the tough club scene finally hit the big time. While the New Wave scene back in the ’70’s was populated with ’60’s flavored guitar bands, Comateens were one of the pioneers in American synth music. Their sound, however, is rooted in music first, science later…The group is not just a synth band and there are, clearly, many ideas, influences and songwriting skills that go into the making of their music…

…What is also unique about the Comateens is that their recent success has been channeled through R&B circles. ‘Get Off My Case’ was first played on WKTU and became a dance hit — a rare case for a new band. It is this multi-dimensional persona that reflects what Nic terms ‘the two sides of the group’. These two sides are represented by funk and pop and have blended into one of the most successful new bands to come down the pike in a while.” 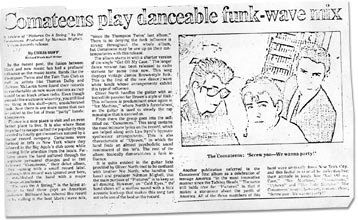 “…Oliver North handles the guitar with an incredible passion for (James) Brown’s style of R&B. This influence is predominant once again in ‘Ice Machine’, where North’s forcefulness on the guitar is used to steady the rap monologue that is carried on…All three members of this band were originally from New York City, and this factor is crucial to understanding their attitude in songs…Comateens image, however, remains clear, ‘Screw you — We wanna party!'”
—Chris Hoff 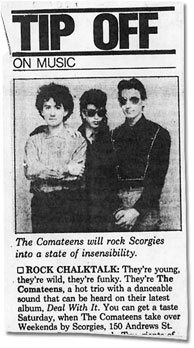 Tip Off: The Comateens will rock Scorgies into a state of insensibility.

“Rock Chalktalk: They’re young, they’re wild, they’re funky. They’re the Comateens, a hot trio with a danceable sound that can be heard on their latest album, ‘Deal With It’. You can get a taste Saturday when the Comateens take over Weekends at Scorgies…”