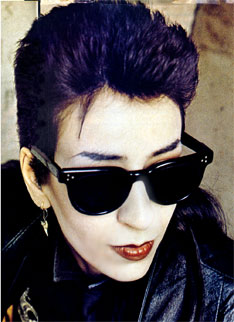 Lyn was born and grew up in upper Manhattan. Her father was a former coal miner of Pennsylvania Dutch ancestry, and her mother was a new arrival in NYC, from Puerto Rico. Lyn was raised with two half-brothers from her mother’s first marriage, and from this unusual parentage sprung Lyn and her younger sister. Though her parents and brothers have passed on, the city of New York and her love for it remains her foundation.

Lyn was the dark insomniac of the two sisters; she was half-tomboy, half-bookworm, and has been an artist all her life. Her earliest and most direct influence was her oldest brother, an extremely gifted painter who also dabbled in guitar and languages. Her artistic and literary pursuits were present from early childhood on, winning commendations throughout her school life. She began pian lessons at the Third Street Music School Settlement in NY’s East Village but stopped years later, during her attendance at New York’s High School of Art & Design, so she could concentrate more on illustration, design, commercial art and writing.

Lyn’s father was born in Kulpmont, PA., the son of a coal mine foreman, one of six siblings. He and his four brothers all worked in the mines and he began driving coal trucks at age sixteen. As evangelical Christians, members of this family were rounded up and thrown in jail for conscientious objection to World War II. Lyn’s grandmother stayed home with two daughters, trying to survive without the men folk and doing whatever is it coal miner’s women do; bake shoo-fly pies, harvest apples, listen to a population of 1,085 breath, and pray
for their men.

Upon release of the male members of the family from the federal work camps a year or so later, grandfather, grandmother, and some of their offspring migrated to New York City to spread the faith and earn a living. Grandfather acquired a chauffeur’s license, and also worked as a security guard, but finally succumbed to the legacy of the mines — black lung disease.

Lyn’s father became foreman of the painters “spray shop” at the Plaza Hotel on 5th Avenue, becoming a master finisher in charge of repairing and maintaining all of the Hotel’s furnishings and surfaces, including the Palm Court, the Oak Bar, and Trader Vic’s, as well as all other ballrooms, suites and corridors. As a young girl, Lyn was allowed to run around the late great Trader Vic’s before opening hours and also visit the vast spray shop with her father, which occupied some top floors and the roof of the Victorian building. She was fascinated with his profession and explored the workrooms of the carpenters, finishers and painters, wondering if she too could join this army of experts one day.

Lyn’s mother, the daughter of a sugar plantation overseer and a hill woman, was born in Arecibo,
Puerto Rico. The area was home to the Arecibo Observatory, where the first pulsar in a binary system was discovered and is known for its use in scenes in the James Bond movie Goldeneye. Lyn’s Abuelo (Grandfather) would inspect his fields on a white horse called Caballo Ballo, with riding crop in hand. Her Abuela (Grandmother), was a Jibaro, a distant descendant of the indigenous Taino tribe of the island. Jibaro’s were uneducated campesino’s who lived in extreme poverty. She had grey eyes and spawned twelve children of which Lyn’s mom was the youngest. Death visited early and often throughout this family and Lyn’s mom was orphaned by twelve years of age, growing up wild, climbing palm trees barefoot, the terror of her classmates.

At eighteen or so Lyn’s mother was compelled to leave her first husband and moved to New York City with her two young sons. One day when Lyn’s father, a slender young man with blue eyes, knocked on her door with Bible in hand, she opened it and discovered her future husband. The moment he saw her, he thought he had discovered his own Dorothy Lamour, and proceeded to marry her and adopt her two sons as his own.

Lyn spent her early years reading everything she could get her hands on and terrorizing her hilly Washington Heights neighborhood on her bicycle. Her parents, determining that she had “some sort of knack” had home-schooled her to read before entering kindergarten, and by the time she was 12, her elementary school teachers verified that she had reached a college-age reading level. Contrary to most coal miner’s daughters, she is a pure product of her uptown Manhattan neighborhood, spending childhood with other kids in the back alleys and on the stoops and streets, watching her big brothers play stickball, listening to AM hits on a plastic transistor radio, and traveling on the A train to Rockaway Beach every summer. It was her oldest brother who nick-named her “Bird” after seeing a TV special about Secretary Birds and deciding that the nervous long-legged creature looked like his little sister.

After putting up with high school as briefly as possible, she became a jack-of-all-trades, holding down many diverse jobs including construction contract work using skills she had learned from her father. A brief list of her early resumes include: portrait artist, plasterer, painter, sheetrock finisher, faux finish expert, stylist’s assistant, and make-up artist.

At one point she ran the popular glam-brand Stagelight cosmetics concession at the famous den of hip New York fashion, Fiorucci, working alongside other under-paid misfits, such as Joey Arias, who would later become one of NYC’s notorious performance artists. Loudmouthed and eccentric as possible, she was hired solely on the strength of her dramatic makeup and wardrobe, showing up for the interview in a snakeskin shirt, white mirrored shades, Elvis-oid hair-do, blue suede rockabilly shoes, and an impossible rabbit fur coat dyed to imitate leopard fur. Although a stickler for drama and androgyny, her wardrobe was a bit buttoned-up compared to the excesses displayed by other members of her posse. She had long ago given up following her fathers religion, but still exercised a certain restraint. This stood her well, though she grieved when many of her peers were destroyed, usually by heroine and AIDS.

In pursuit of writing outlets, Lyn has also contributed to various magazines including NYC-based lifestyle titles City and Tart, and San Diego’s Axcess magazine. Reporting mostly on art and technology, she ultimately decided that writing commercial magazine columns was not her cup of tea, and dropped the pursuit entirely in favor of design work. Her first position was as web designer for a global engineering firm, then as art director at Interocity, a hot web-development company in NY’s Silicon Alley.

An insomniac from age 5, Lyn would later be free to live by night, always easy to spot in sunglasses & sharkskin suit after sunset, fueled by tostones, egg creams, neon, and plenty of mascara. In the late seventies and early eighties, Lyn Byrd could always be found at any one of her favorite NYC stalking grounds: Mudd Club, Danceteria, Max’s Kansas City, Steve Rubell’s Palladium, The Pyramid Club, Hurrah, CBGB’s, The Ritz. She spent countless hours after clubbing at every all-night diner in NYC, especially Dave’s Luncheonette, famous for it’s egg creams. Country settings and Rockaway Beach were anathema. This was mostly due to an allergic reaction to tree bark, which made her hands swell and itch, and an obstinate devotion to being fashionably pale. Any semblance of vampirism was immediately destroyed by even one day in the sun thanks to her Puerto Rican heritage, and she became expert at applying Max Factor Pancake in clown-white. Born with a severe lack of any sense of direction, she learned to navigate by landmarks such as the ever present Empire State Building alone, and being a die-hard Manhattanite, she never learned how to drive nor did she know how to get to any of the “Boroughs”.

In 1978 she was recruited by Ramona Lee Jan to join the Comateens, once again because “she has a cool wardrobe” and because she could read music somewhat. Both Ramona and Lyn had boyfriends in the fabulously loud pop-a-billy band The Rousers. The Rousers were a gang of troublemakers that lived in what was referred to as “The Rousers Clubhouse” at 4 St. Marks Place directly over the East Village’s iconic Trash & Vaudeville boutique. In this almost habitable apartment, some of the Rousers slept in tents, due to lack of solid walls and the threat of vermin. Parties at the Rousers Clubhouse usually involved them playing real loud and a visit from the NYPD to see what all the commotion was about. The guys charmed their way out of trouble, but the hotdog vendor they’d hired for the party, handing out free “dogs with all the works to the cops might have helped. It was one of the Rousers, guitarist Bill Dickson, who for better or worse, came up with the name “Comateens”. Neither The Rousers deadly lead guitarist Tom Milmore, or glamourous lead singer Jeff Buckland, predicted that their girlfriends, Ramona Jan and Lyn T. Byrd respectively, would go on to present serious competition in the NYC music scene. Sorry boys.

Lyn’s first gig with the Comateens was Ann Magnuson’s “New Wave Vaudeville Show” at Irving Plaza in NYC, a decadent and silly cabaret style show that sent out an open call for “Geeks, Egyptian slaves, emotional cripples,” etc. to perform. Comateens set up in the theater’s lobby to entertain attendees arriving at the venue, which would feature the debut performance of the unique Klaus Nomi.

Lyn’s initial job was to push the buttons on Mini-Pops, a tiny beat box by Korg, with an assortment of preset rhythms including cha-cha, beguine, tango, rumba, bossa-nova, waltz, march, rock, etc. Due to a flaw in its design, it was possible to mash down several buttons at once and combine some of the patterns. For this gig, Lyn dressed the normally dark and moody Comateens all in white with matching jackets, just to confuse everyone.

Band co-founder and bass player Nic, decided to let her stay on, much to her surprise. Very rusty on keyboard after her long absence from her early music training, she had to re-learn how to read music and play. She started with a 1973 vintage Mini-Korg monophonic synthesizer, playing simple melody lines, and later graduated to polyphonic keyboards, most notably the 1983 Korg Poly-800.

During her tenure with the band she honed her vocal techniques, progressing from her early ad hoc approach to a more controlled delivery. Nic and Oliver’s musical ability impressed her deeply and she was the brothers biggest fan. One of her favorite aspects of live performance was double-billing with other bands that she admired including: Etienne Daho, Klaus Nomi, Alan Vega of Suicide, OMD, The Rousers, The Speedies, Nervus Rex, Brian Setzer’s old band The Bloodless Pharaohs, and Echo and the Bunnymen. She did her best to manage the image and marketing of the band, often butting heads with music industry professionals who had ideas of their own. She continued to raise hell throughout the Comateens entire career and did not give up until the bands dissolution in 1992.

Nic and Lyn did a non-Comateens project starting in 1987, recording briefly as West & Byrd and releasing an album in 1988 on the Virgin France label. Afterwards they revived Comateens to contribute to a compilation record, once again for Virgin France. The duo continue to be close friends, work on projects whenever possible and have performed on a couple of albums by their friend, French pop-star Etienne Daho.

Original “biograph” for Lyn as distributed in the Comateens press kit.