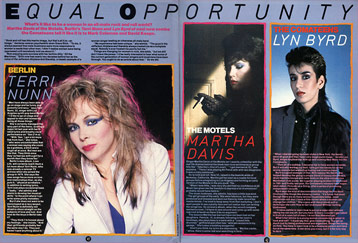 “…What’s it like to be a woman in an all-male rock and roll world? Martha Davis of the Motels, Berlin’s Terri Nunn and Lyn Byrd of cool new combo Comateens tell it like it is.

…’When I started going to music clubs in New York, the bands were all guys and they had a very tough punk image,’ recalls Lyn Byrd, singer-keyboardist with up-and-coming New Wave trio, Comateens. ‘Then all of a sudden, it became hip to have women in bands. But it actualy worked out well. Girls got into bands for all the wrong reasons but wound up having real creative input.’ Byrd is a good example of that. With bassist Nic North, she helped develop the group’s unique blend of breezy electronics, drum machine boogie and rock roots on the ultra-competitive Manhattan club scene. Nic’s guitar-playing brother Oliver joined in 1981 and finally last year, Comateens released their major-label debut, Pictures on a String, after a series of promising independent records. Byrd says the kind of discrimination that bugs her the most involves little things like dressing rooms. ‘It’s funny that even though there are so many women musicians today, most nightclubs still don’t have a little corner where a woman can change her clothes.’ She copes with the problem with a technique she calls How to Get Undressed Without Getting Undressed. ‘It takes awhile to learn how to put on a clean shirt wthout taking the old one off, but you have to learn. I couldn’t get naked in front of a room full of men; I’m not that liberated yet.’ What’s her advice to a young woman considering a career in rock and roll? ‘I’d just say this: give it everything. You get so much just by being professional and organized, things like being on time. You have to learn how to be a business person and have fun at the same time. It can drive you crazy, but it’s the only way to do it’. ”
—Mark Coleman and David Keeps