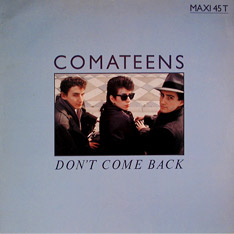 12″ EP of two songs from the Deal With It album, with a special remix of Don’t Come Back.